My fiancé Jason read this question aloud while looking at his phone screen. We had been working our way through a list of 430 questions for couples that he randomly found online. After spending two years in a 500 square foot apartment together, we found this list to be a fun way to learn new things about each other.

I knew my answer to this question right away because I remember it vividly. 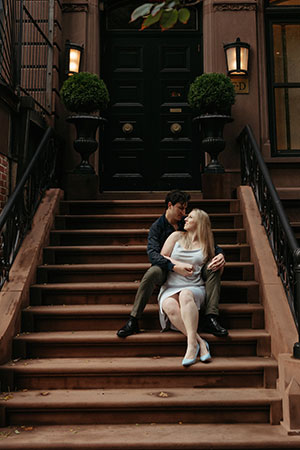 It was maybe our third date, and we had stopped by my apartment so I could change my pump site. Jason started narrating what I was doing under his breath, explaining to himself that I was filling a tiny container with insulin, putting the insulin through the tubing, which connects to that other piece that goes into my skin.

I saw the wheels turning in his mind like he was putting the pieces of a puzzle together. I thought it was weird that he knew enough about insulin pumps to know the general idea of what I was doing, so I asked, “Do you have any questions about what I’m doing? Why do you seem to know about this? Do you know someone who has type 1 diabetes?”

“Oh, I’ve read some stuff about how pumps work, so I’m just watching what you’re doing,” he replied.

“What do you mean, like on the internet?” I asked, unable to hide my surprise.

Unaware of the fact that I was impressed by any of this, Jason said, “Uh yeah, I guess so. I’ve been looking at a bunch of different sites and forums about type 1, just trying to, like, learn as much as I can. It feels like it’s such a big part of who you are, and I want to understand everything about you.”

That was the moment I knew Jason was “the one”.

It’s so simple and it sounds silly because it’s the least someone could do if they care about someone with T1D. But I’d dated a lot of people since I was diagnosed with T1D in college, and almost every person I met said at least one of the classics: “maybe you should exercise more”, “my dog had diabetes and died”, “diabeetus”, “eat less candy”, “I could never give myself a shot”, and the list goes on.

I’d grown so used to meeting people who were either uninterested or unwilling to learn about the intricacies of life with T1D. They thought they knew all about it because of what they’d seen on TV, or they viewed it as baggage they didn’t want to deal with, or they assumed I didn’t take good care of myself.

Jason wasn’t just open to learning about T1D; he wanted to know everything.

Over the course of only a few dates, he noticed the unspoken weight of T1D that I carry every day and decided that he would do anything to take some of that weight off of my shoulders.

The themes of that fleeting moment have echoed throughout the five years we’ve spent together. It showed me that he is generous without expecting praise, he wants to truly understand the experiences of others, and that he would be my teammate during both good times and bad.

“Ok, my turn! When did you know I was ‘the one’?” I eagerly waited to hear about some moment where he realized I was the most beautiful, smart, funny, kind, and perfect person in the entire world.

“I think it was when you showed up to our friend’s party, plopped your meter down on the coffee table, checked your blood sugar while everyone watched, and then swung your insulin pump around in front of everybody. I remember thinking how cool it was that you were so confident, and that you were so open about your T1D and didn’t care what anyone else thought. I just knew you were special in that moment.”

Although this wasn’t the overly flattering answer I was hoping for, I laughed because I was surprised that T1D played a role in both of our responses to this question.

It shouldn’t be all that surprising to me, though.

I’ve always felt like the cheesy saying of “when you know, you know” applied to relationships and T1D. I knew that with “the one”, talking about T1D would be easy. They would be curious, helpful, and patient. They would carry low snacks everywhere, and they wouldn’t be annoyed at the overnight alarms that wake them up. When I met Jason, he did all of this and more with a smile on his face.

I am incredibly grateful to Jason and everyone who loves a person with T1D. Thank you for being our biggest supporters through every high and low.

Everything You Should Know About Clinical Trials

Advice for Someone Newly Diagnosed with Type 1 Diabetes

My Experience Photographing People with T1D & Their Devices

Putting The One in T1D: A Love Story Cancel reply