I met with Brandon A. Denson and Matthew Tarro, President and Vice President of Bolus Maximus, for a podcast on their YouTube channel. I had known Brandon for a few months through social media; we are both recent transplants to San Diego, Black and living with type 1 diabetes. He had told me about his non-profit, Bolus Maximus and his diabetic business partner named Matt, but this was my first opportunity to sit down with them both to unpack their journey of helping others living with diabetes.

As a Vegan, I have found that there are beautiful, rare moments of being in exclusively Vegan spaces, that leave me feeling recharged. Well, I’ve had diabetes for 21 years and sharing space exclusively with other diabetics is an even more rare experience–let alone, where two out of those three diabetics are Black. What a cool experience to be sitting across the table from these two men, pump notifications sounding off in the background, each of us occasionally reaching down to our pumps, checking our CGMs and making adjustments accordingly throughout the interview!

Brandon—diagnosed at 17—and Matt—diagnosed at 16—explained the need for creating Bolus Maximus. “There wasn’t a support system. While I had an older male to talk to, I never had a good foundation to hear from other males living with diabetes,” Matt told me. I thought to myself how I hadn’t seen many boys being vocal and in the public about their diabetes when I was younger. This noticeable silence and lack of mentorship for diabetic males, led Brandon and Matt to factor in a support group element to their non-profit.

Bolus Maximus hosts a weekly Sunday Zoom call, “We all come from different places, different demographics, races and economic backgrounds, but we all share one common thing. We are either a caregiver or we’re living with diabetes. Any time you have an opportunity to meet another diabetic, it just feels good because you know what that person is going through. No matter where you come from and how you were raised, you automatically have a connection,” Brandon explained.

I had sat in on a few of these Sunday Zoom meetings already, and I knew first-hand what it felt like to listen to the stories from a diverse audience and share my own experiences of extreme lows, helpful tips and the like. Brandon mentioned how Bolus Maximus will be creating a Men’s Zoom meeting, where diabetic men and their support systems have a safe space to be vulnerable with other men who truly understand.

This emphasis on holding space for individuals to listen and share about their experiences with diabetes has developed further into prioritizing bringing support to underserved communities. “While not being a Black man, I recognized very quickly that most of the community was predominantly affluent, white individuals who looked like me,” added Matt. “There wasn’t anyone who I saw like Brandon; an absolute go-getter, living his best life with diabetes. He should be out in front of people; not just because he’s a Black man but also because he’s inspirational.”

The idea for Bolus Maximus originated three years ago when Brandon and Matt found solace in their hours-long conversations with each other. They thought it was necessary for other people to also have access to this solidarity. The Bolus Maximus motto is ‘Support, Educate and Motivate Individuals Living with Diabetes’. Bolus Maximus’s education initiative includes diabetes prevention outreach and one-on-one mentorship programs. I can see how having a Black business owner who is a successful content creator and true empath as President, would be motivational for anyone to see, but especially for boys and men from the African Diaspora.

During the interview, Brandon had mentioned how difficult it was for men to open up. “Men in general [regardless of race] don’t like to be vulnerable. You can still be tough and let your wall down, being a Black man living with diabetes.” Getting to know Matt and Brandon showed me that they had already done a lot of work with this, breaking down those societal contracts that many men feel that they must uphold. Their demeanor, their love—their comfortability with expressing it—and the energy from the partnership they have with each other is absolutely infectious!

Before ending our conversation, we shared our self-care practices; something in our lives that holds much value for our diabetes management and mental health. Brandon said, “I love to hit the beach and rollerblade. That’s my escape and my serenity – getting kissed by the sun, just feeling good!” Matt’s approach to self-care includes recent lifestyle-changes. “Sobriety is big for me,” he spoke of how abstaining from drugs and alcohol and eating clean led to major health improvements as well. “Throw one more in there for self-care,” Brandon said. “The weekly, Sunday Zoom calls! Before the call last week, I was feeling a little off, but after connecting with other people, I felt refreshed and revived. This is all bigger than us, you know? That’s what keeps us going.”

To find out more on how you can support Bolus Maximus, get their weekly Zoom call meeting information or contact them, visit www.bolusm.org.

Top Questions of the Day – February 2021 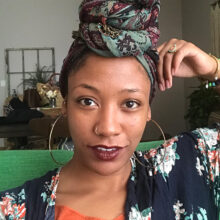 Dalyce Wilson is a photographer and writer based in Southern California. She has lived 6 years abroad; documenting her journey in Northern Ireland and Thailand. She has been living with Type 1 Diabetes for 22 years and adopted the Vegan lifestyle 11 years ago.

The Impact of Connections for People Living with T1D